These shutters offer a variety of panel options with raised panels, flat panels, or flat panels with custom mouldings. Offering the most room darkening and privacy, raised panel shutters can be styled to match historic or contemporary spaces.

Americana DeVenco manufactures new shutters to your exact specifications for your application. We can finish in the color you choose (or raw for you to finish) and all shutters ship pre-hinged and ready to install. You should expect your Americana DeVenco shutters to last into the next generation with little maintenance.

The Raised Panel or Flat Panel shutters you buy today will be enjoyed for years to come. Whether you have a home of period significance, a new home designed to replicate period architecture, or you are renovating and desire a timeless window dressing, our shutters are tailored to your requirements.

All wood is milled by us in our shop. There are no prefab or stock-sized parts. All work is done in our shop by skilled craftsmen to the highest standards in the industry today.

Following our state-of-the-art CAD drawings that are reviewed and approved by the customer for accuracy, the components for each shutter are cut by hand, piece by piece, the old-fashioned way. The shutters are then assembled by hand using old-world cabinetmaker construction techniques.

After assembly, each shutter is sanded and buffed by hand and prepared for finishing. All shutters receive a superlative finish in the color specified by you. We can match any brand or a provided color. The result is a quality finish that will be easy to maintain and which should last for many years.

Hardware is carefully set on each shutter, and they are packed like Waterford crystal for shipping.

One of the earliest shutter styles in Colonial America, the Raised Panel shutter was a very popular window covering offering both privacy and practical protection from the elements—and insects—as well as security from possible intruders. Since glass was very expensive, it was much more economical to use shutters which also offered additional warmth in the winter.

Both double hung and single hung styles are architecturally correct. The earliest shutters were very basic, much like the homes for which they were built, and contained only one panel. As industrialization progressed, so did the attention to the functionality and detail that shutters provided in homes. This detail included the customization in the style of the panels, which led to the creation of interesting patterns such as the “Old Salem,” “Three Panel Colonial,” or “Georgian.” To see several styles highlighted, an article on interior shutters is available: Raised Panel Shutters

In Williamsburg c. 1750, George Wythe built a modern brick home in the Classic Georgian Style. Raised panel shutters typical of the period were used on the windows exclusive of any draperies or valences. The shutters still exist today and still function as they should. The Wythe House shutters were single hung with three raised panel inserts per shutter section. Today, raised panel shutters are most often hung double which creates a top half or tier that hinges open separately from the bottom half of the window. The hanging hinge allows the shutters to hinge back completely flat against the wall when open to view the outside.

In Old Virginia, Raised Panel shutters were a very popular window covering because they offered privacy, practical protection from the elements, as well as security from possible intruders. In 1700s Williamsburg, the capital building was fitted with wooden blinds and raised panel shutters. The shutters were used in the evening for security and additional warmth in the winter, while during the daytime the shutters were folded conveniently out of sight into the window jambs, also known as Pocket Shutters. The wooden blinds then were used to deflect the sun during the day. 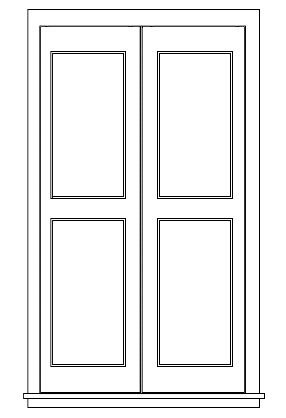 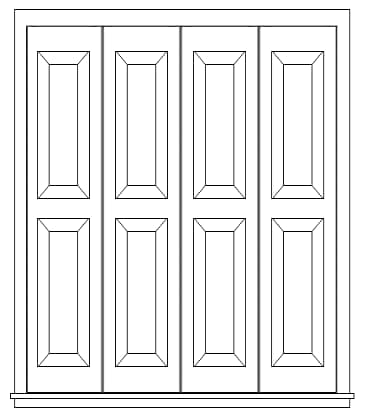 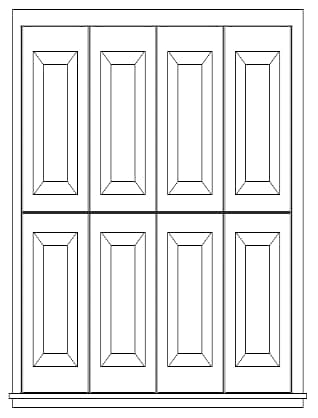 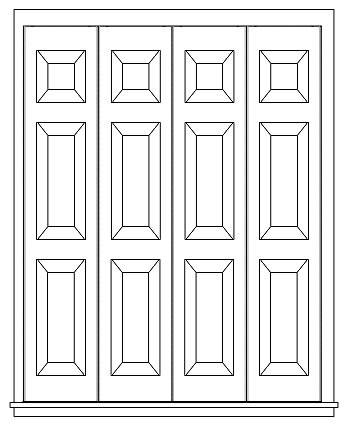 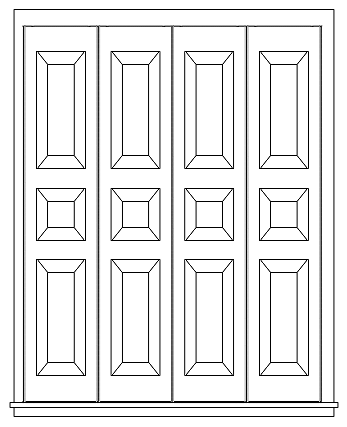 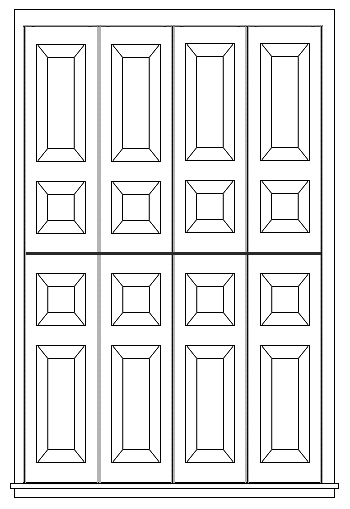 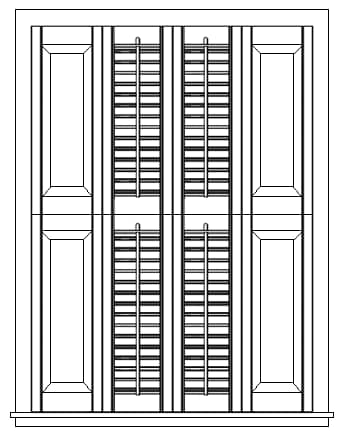 Similar to the Georgian style, it was a short distance to travel to create the “Old Salem” shutter. This style allows you to open the top tier for light and keep the bottom tier of shutters closed for privacy.

In New England and other areas in the east, it became popular to combine the raised panel shutter with a louvered shutter within a single window. This design most often consisted of two louvered panels flanked by two raised panels. This gives the elegance of the raised panel and the light availability of the louvers. This design was very popular in New England from the middle 1800s through the Victorian period and is still seen today in original Brownstones, Townhouses, and Row Houses. This Raised Panel/Louver combination was particularly popular in Brownstone Architecture, thus the name it has acquired: “Brownstone” style shutters. Brownstone shutters are comprised of the DeVenco Victorian louvered shutter and the Raised Panel shutter.

Brownstone or Raised Panel shutters are often made to fold into the walls bordering the windows. These are called Pocket or Embrasured shutters.

Our forte is replicating historic designs. Raised panel or flat panel shutters are not recommended taller than 74” nor wider than 16” for each leaf. Your Americana DeVenco Raised Panel shutters will be custom manufactured from your size specifications using any panel configuration you may specify. We suggest that you sketch your window to scale when designing multiple raised panel inserts in order to properly proportion the sizes before you place your order. You will have a chance to see a scaled drawing of your shutters prior to fabricating, solidifying that what we offer is high quality, hand-crafted shutters that match as near as possible what the original architect may have specified decades earlier.

Whether you have a new home designed to replicate period architecture or an actual home of period significance, your windows deserve the finest. Raised panel shutters will be a feature you will be proud of for years to come and will be passed on to the next generation. Windows are often the primary architectural asset of a room. Their treatment is not insignificant to the room or the house. Consider them carefully. 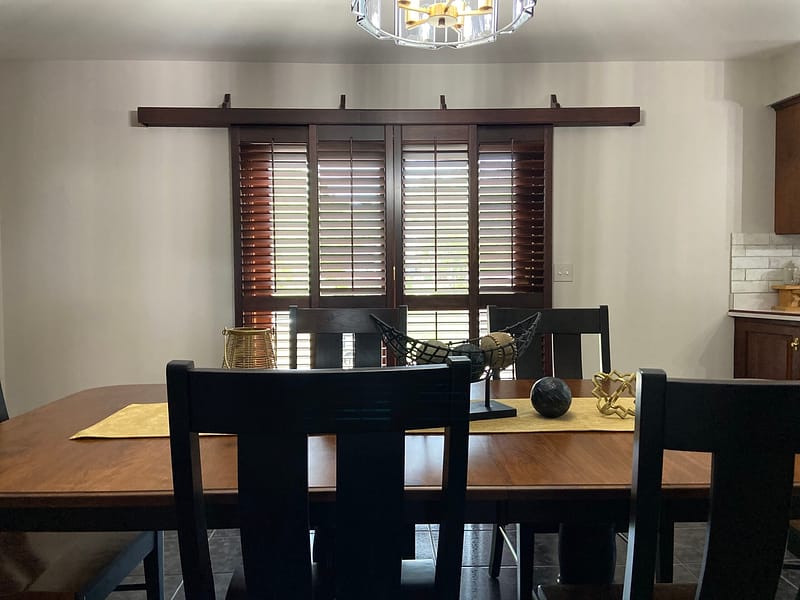 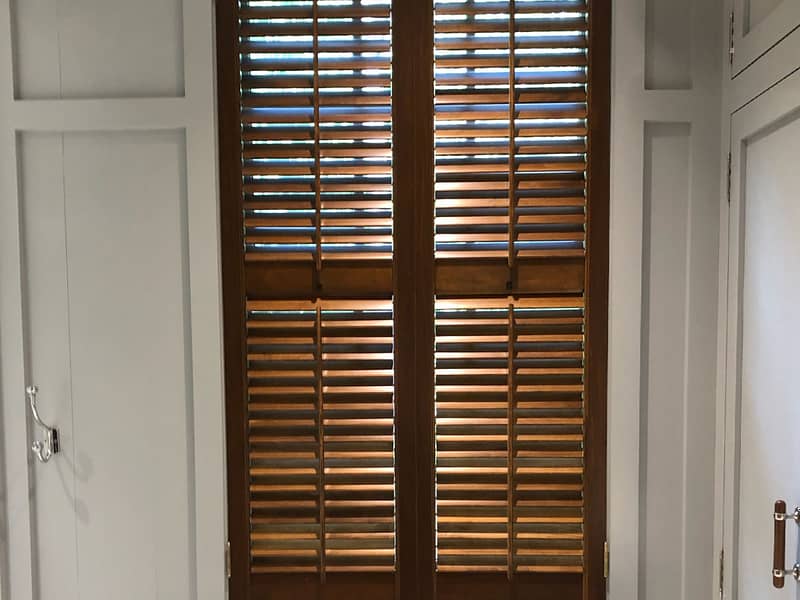 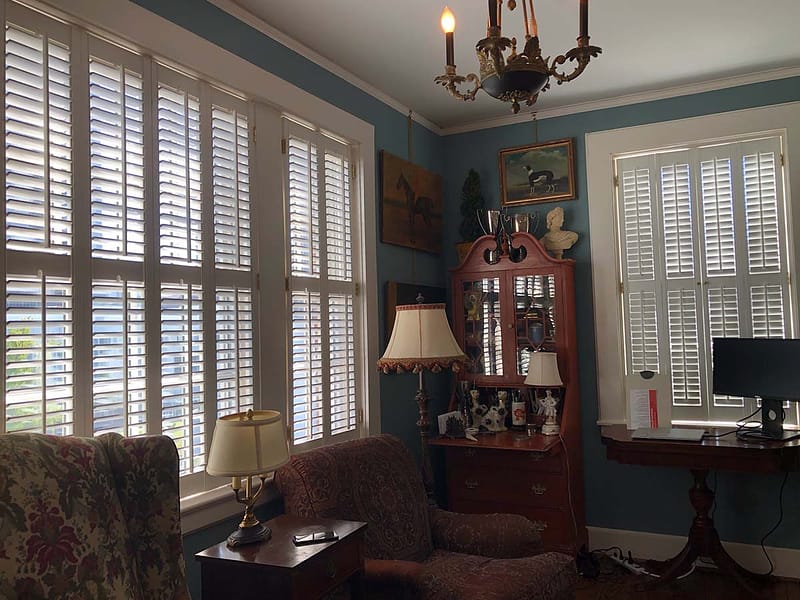 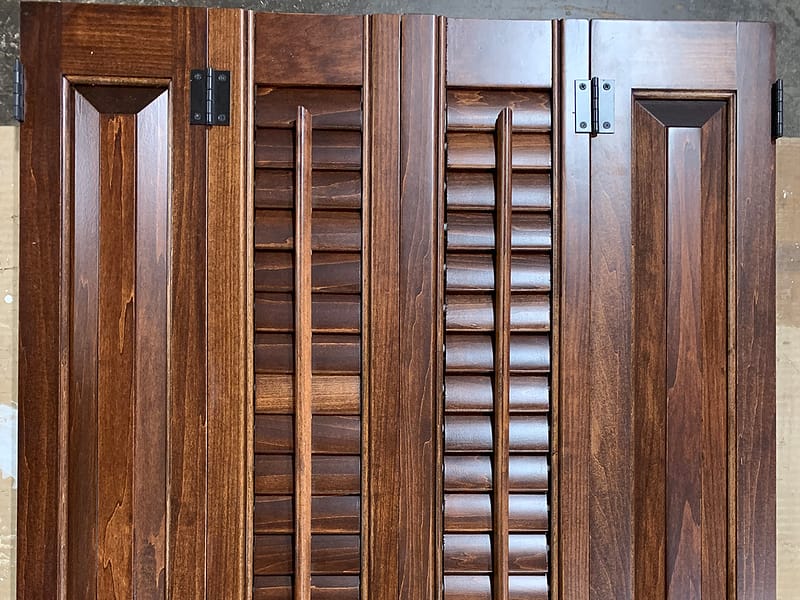 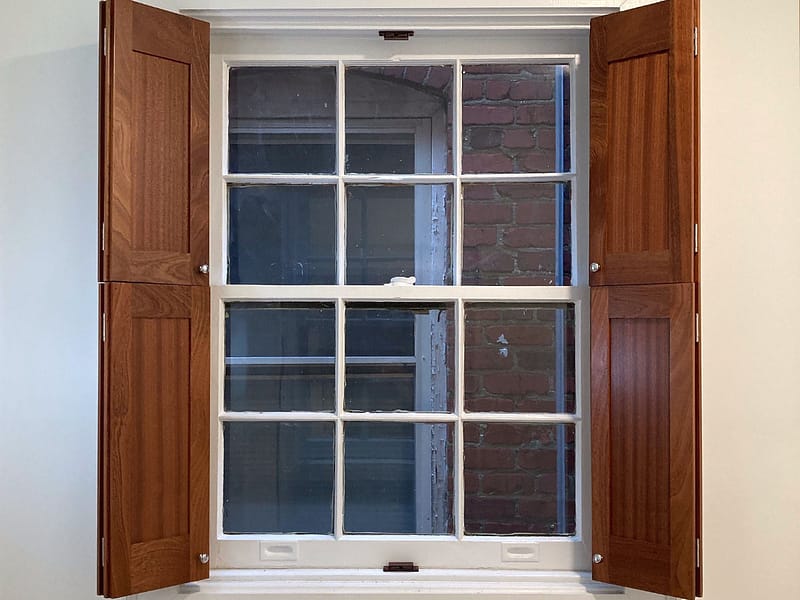 When your Americana DeVenco shutters arrive, they are ready to install—minimal assembly required. Each hanging hinge allows fine-tuning to tolerate minimal adjustments in the installation in order to align each panel with its mate and tolerate potentially out-of-square windows.

Tools required for installation are:

Our staff is available for support Monday through Friday, 8:00 AM to 4:00 PM CST. Do not hesitate to call.